Yes, even though Summer is officially here and, for many of us, the daily use of a deodorant is more important than ever, you really should consider ditching your deodorant – and replacing it with a more natural alternative – and here’s why:

We all know that sweating is a natural bodily function, the purpose of which is to produce water on the surface of your skin so that when it evaporates, it cools your body. Sweating can also be a response to stressful situations - a reaction to the body preparing for physical action – like fight or flight. But did you know that perspiration itself is practically odourless? It’s true - the odour we smell happens when sweat comes into contact with bacteria on your skin. 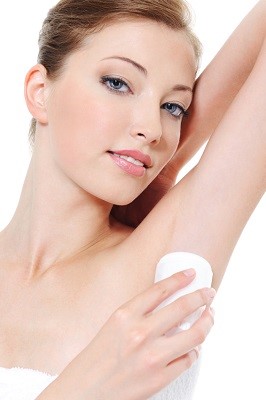 So what is the difference between anti-perspirants and deodorants?

The purpose of anti-perspirants is to prevent sweating. Many typical anti-perspirants usually contain an aluminium compound that enters the cells causing them to swell and block the sweat ducts in your armpit, thus eliminating wetness. Common sense would suggest that blocking these ducts and preventing this natural bodily function is not necessarily a good idea. A deodorant, on the other hand, works to neutralise odour. Many deodorants on the Australian market are also anti-perspirants.

What’s in your typical deodorant/anti-perspirant?

In addition to blocking your sweat glands, many anti-perspirants also contain irritating chemical bactericides, as well as other known toxic ingredients.

Parabens are preservatives used by the food, pharmaceutical and personal care industries. In cosmetics a synthetic preparation derived from petrochemicals is used. Parabens can easily penetrate the skin. They can mimic oestrogen and therefore act as potential hormone system disruptors. They have also been detected in human breast cancer tissues. Given the proximity of one's armpit to the breast area, concerns have been raised about the use of parabens in traditional anti-perspirant products. Parabens have also been associated with skin rashes.

Propylene Glycol is an inorganic compound made from the same chemical that is used to create anti-freeze. It easily penetrates the skin and is linked to damage of the liver, kidneys and brain.

Talc is a powdered native, hydrous magnesium silicate sometimes containing a small portion of aluminium silicate. The main concern with talc is that it can be contaminated with asbestos-like fibres, posing risks for respiratory toxicity and cancer.

Triclosan is an antibacterial agent and preservative used in many personal care and household cleaning products, such as soaps, detergents, shampoos, toothpaste, mouthwash, and even in bedding, kitchen utensils and toys. Apart from being a persistent environmental toxin, in humans it has been associated with endocrine (hormonal) toxicity, organ system toxicity, bacterial resistance and irritation/allergies. It is registered as a pesticide. Triclosan has been on the EU’s “hit list” for some years and as of 2015 was being phased out of all personal products. In September 2016, the US Government announced it will finally take action against this ingredient and has banned it from soap products. Australia is yet to regulate against triclosan.

How do natural deodorants work?

Natural deodorants and organic deodorants contain plant-based ingredients that work to neutralise the odour caused by skin bacteria, while still allowing your body to release toxins - just as nature intended.

So, if you’re finally ready to ditch your deodorant and the chemicals that come with it, check out Naturally Safe Cosmetics’ range of hard-working natural and organic deodorants. After all, deodorants like Eco By Sonya Organic Coconut Deodorant and Mukti Botanical Deodorant are so effective, they have even been endorsed by athletes!