Well, it’s not really a secret. It’s something that all women experience, usually from somewhere between the ages of 11 and 14 years till somewhere around the late 40’s to early 50’s. Yes, we’re talking menstruation!

Throughout history, women have dealt with the issue of menstrual bleeding in varying and interesting ways.

The mention of menstrual pads goes back very early. In the 10th century, it was recorded in the Suda (a Byzantine encyclopedia) that Hypatia (a Greek mathematician and philosopher who lived in Egypt in the 4th century) threw one of her used menstrual cloths at an admirer in an attempt to discourage his unwanted attentions. She sounds formidable! Can you imagine doing that today?

As well as rags, in early centuries, women also fashioned early forms of tampons. Apparently the ancient Egyptians invented the first disposable tampons, which were made from softened papyrus, and the ancient Greeks invented tampons made from lint wrapped around a small piece of wood.

The first commercial sanitary pads, made by Johnson & Johnson, went on sale in 1896 and were called Lister’s Towels. These pads initially failed to sell because women didn’t want to declare to the public they were menstruating by being seen buying them.

During the early 1900’s, women still preferred rags and cotton cloths similar to baby nappies. These were used by women during their period, washed and then re-used.

However, over time, menstrual protection progressed from the use of rags designed merely to protect clothing from leaks to products designed for absorption. It is thought that the first sanitary pads came about when French nurses in the First World War realised that Curad bandages were a lot more absorbent than homemade menstrual rags and they started using them as pads.

The first commercial applicator tampon with a cord for easy removal was invented 1929 by Dr Earle Haas. Tampax was the brand name chosen and the tampons were on the market by 1936.

Reusable menstrual cups were invented in the 1930’s but many women viewed these as a backward step in menstrual products and so they weren't particularly popular. Cups have periodically resurged throughout the decades (ok, yes, pun intended!) We saw them in the 1950’s and again in the 1970’s but they have never managed to gain the popularity of tampons and pads.

Tampons were quite popular by the 1950’s and, in 1966, Kotex began individually wrapping pads for better hygiene & convenience while travelling.

Adhesive backing became popular in the 1970’s, putting an end to the need for belts, pins and similar fasteners. Around this time, the first winged pads also made an appearance on the market.

In 1978 Proctor & Gamble created an extra absorbent tampon from material that expanded to create a cup shape. However, in the early 1980’s, health professionals realised that this material contributed to hundreds of cases of Toxic Shock Syndrome, leading to several deaths and prompting stricter regulation of hygiene products.

The 1980’s saw a shift in feminine hygiene product advertising to focus on women being active during their period.

Since the 1990’s, most of the changes to feminine hygiene products has revolved around shape, comfort and making pads thinner and more discreet.

So now we come to the present day.

What’s in your typical pad today? Well, conventional sanitary pads can be made up of 90% plastic materials. Plastic does not break down for a very, very long time so these plastic materials pollute our environment. Plastic waste ends up in landfill sites and oceans, affecting marine life and the food chain. Sanitary waste is sometimes incinerated, releasing harmful gases and toxic waste, or sent to landfill. And just think, over 45 billion sanitary pads are disposed of each year!

In addition, materials like plastic and latex can cause irritation, skin allergies and itching.

Many popular brand sanitary pads and tampons are made from non-organic cotton. Non-organic cotton can be contaminated with potentially harmful pesticide residues, phthalates, azo-dyes and dioxins. Ask yourself - do you really want those types of chemicals in or near such a sensitive and absorptive part of your body?

Like many paper products, non-organic cotton is also usually chlorine bleached. Chlorine bleaching is a process that creates a carcinogenic by-product called dioxin. Again, why would you want dioxins in your feminine hygiene products?

Most commercial brand tampons made from a mix of rayon and non-organic cotton. Some have a plastic wrap or have been dyed a different colour. Rayon is used because it is highly absorbent but not only does it absorb blood, it can dry out the natural protective mucous lining of the vagina. 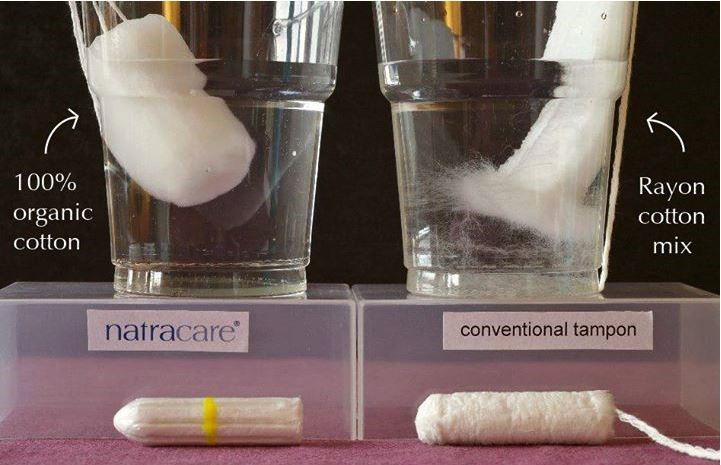 Another potential problem with conventional tampons is fibre loss. The image above demonstrates fibres coming off a conventional tampon, compared to a Natracare tampon. This is because tampons normally contain a mix of rayon and pesticide-sprayed cotton. The short and straight nature of rayon fibres means they can easily slide apart from each other, shedding into the vagina. This can have hygiene implications, as well as implications for bacterial colonisation which can contribute to vaginal infections. Rayon in tampons has also been associated with Toxic Shock Syndrome. After initially denying the fibre loss issue, some manufacturers made the decision to place a polypropylene (synthetic plastic) overwrap around their tampons which reduced some of the fibre loss but did not entirely eliminate the problem. The fibre in 100% organic cotton has a wavy construction that easily interlocks and is not prone to shedding.

Do you know what’s in your tampon? Take a look at the following video to find out:

Time for a Natural Alternative

Now that you know what's potentially in your feminine hygiene products, you may be ready for an option that's better for both you and the environment.

Natracare pads are made from a combination of certified organic 100% cotton and sustainably-sourced natural, plant-based materials. Cotton fibres are 70% crystalline and 30% amorphous whereas fluff pulp derived from pine wood is 70% amorphous and 30% crystalline. This makes wood pulp a lot more absorbent and is one reason why Natracare chooses to use ecologically-certified cellulose pulp in the core of their pads. The effectiveness of these ingredients in locking away fluid and the absence of synthetic materials means your skin is able to breathe and stay dry.

Natracare tampons contain 100% organic cotton. Those with applicator tubes are made from cardboard, not plastic.

All Natracare products are biodegradable and compostable. They are free from chlorine, rayon, plastics, dyes and perfumes.

At Naturally Safe Cosmetics, we believe that, whatever your preference when it comes to feminine hygiene, the products you use should be free from toxic ingredients. For this reason, Naturally Safe Cosmetics recommends and stocks the Natracare range of menstrual products. In fact, women have been choosing Natracare’s range of high quality, organic and natural feminine hygiene products since 1989. Natracare’s use of natural materials makes their products soft and gentle on your skin and the fact that they are biodegradable makes them gentle on our planet too! And guess what, they really do work! Natural, organic, gentle and toxin free - what's not to love?

Natracare’s founder, Susie Hewson, is a vegetarian and supporter of PETA so, of course, all Natracare products are: